MongoDB is a popular NoSQL database, and it is prevalent for its simplicity and power. But it does not have an interactive GUI, which makes it difficult to use. The GUI is significant as it makes the developer's job more comfortable and efficient. Our product — NoSQL Manager — is the best player on the market. With this ground-breaking program, writing codes in Mongo will become more accessible!

Have you ever dreamed of creating data storage in Mongo without any problems? It is now possible thanks to the NoSQL Manager. Creating a base based on our software is easy and does not take much time: you will have the desired Mongo database in just a couple of clicks.

NoSQL Manager is a tool for Mongo data storage administration and management. It provides a rich set of GUI tools for those using MongoDB, including database developers and their administrators.

This product will be an excellent solution for beginners in the field of programming and advanced users. Anyone who encounters problems while designing a database in Mongo gets access to the uncomplicated functionality of this console, which will simplify the work of any computer enthusiast.

How to easily create a database with NoSQL Manager

When starting to work with MongoDB in the NoSQL Manager console shell, the first step is to set the desired data storage as the current one to use later. It may look strange for you if you only had expierence with SQL databases, but there is no 'create database' command in the MongoDB. It doesn't matter whether such a database exists or not, and if it is not there, then MongoDB will automatically create it when you add data to it. The sample below illustrates that behaviour.

Connect to your MongoDB instance and execute the following commands using the Shell:

Since our MongoDB installation is clean, the first command returned only three system databases:

The second command switched the execution context to the 'test' database:

But didn't create any database as we can see from the third command result:

The command #4 successfully created a collection in the current database (test):

Also this command has created the test database, as we can see from the command #5 result:

Using the command, you can get statistics for the current database:

But the simplest way to create a database is using NoSQL Manager Create New Database dialog: 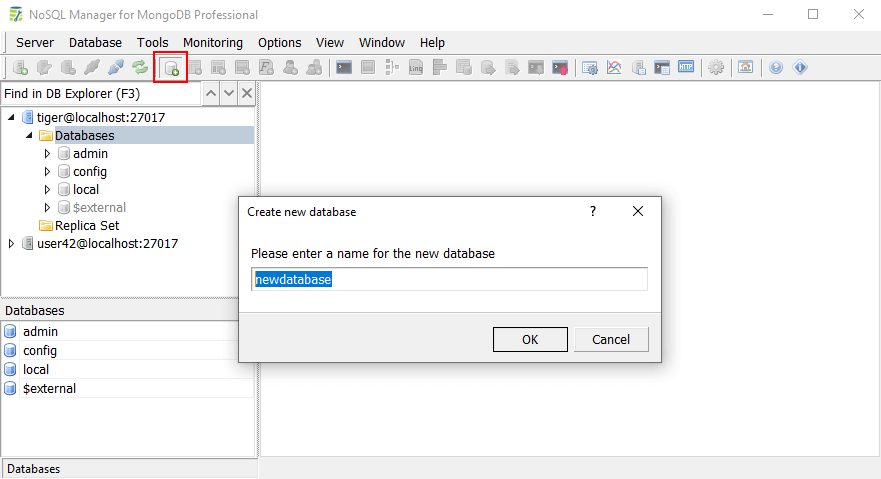 This dialog creates a temporary collection named empty_collection (like in the sample above).
You can delete this collection later when create your own real collections. 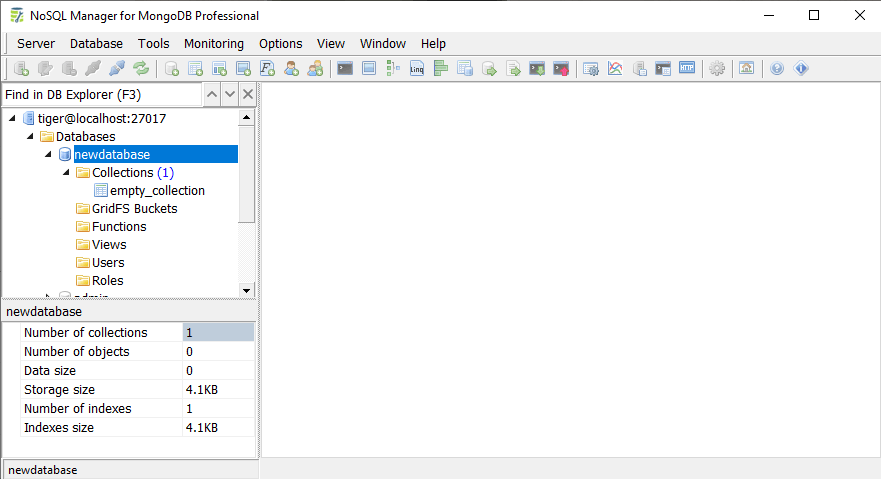 As many computer experts have experienced, it is often challenging to create new data storage in Mongo. Nonetheless, with the NoSQL Manager, it will be simple and clear. Pick the license that's right for you and purchase NoSQL Manager today to discover Mongo's ease of use. The user-friendly graphical interface of our product, functions that make your work easier — all this helps you write codes and create databases faster. Check out what plans are available and order your perfect one.

We use cookies to ensure you get the best experience on our website, to provide social media features and to analyse our traffic. Read more Accept